You have permission to edit this article.
Edit
Home
COVID-19
metroMAGAZINE
metroTV!
LOCAL EVENTS
weeklyCONNECTOR!
101 Things to Love About the Metro™
The Giving Guide & Event Book
Multimedia
Business Directory
Share This
1 of 2 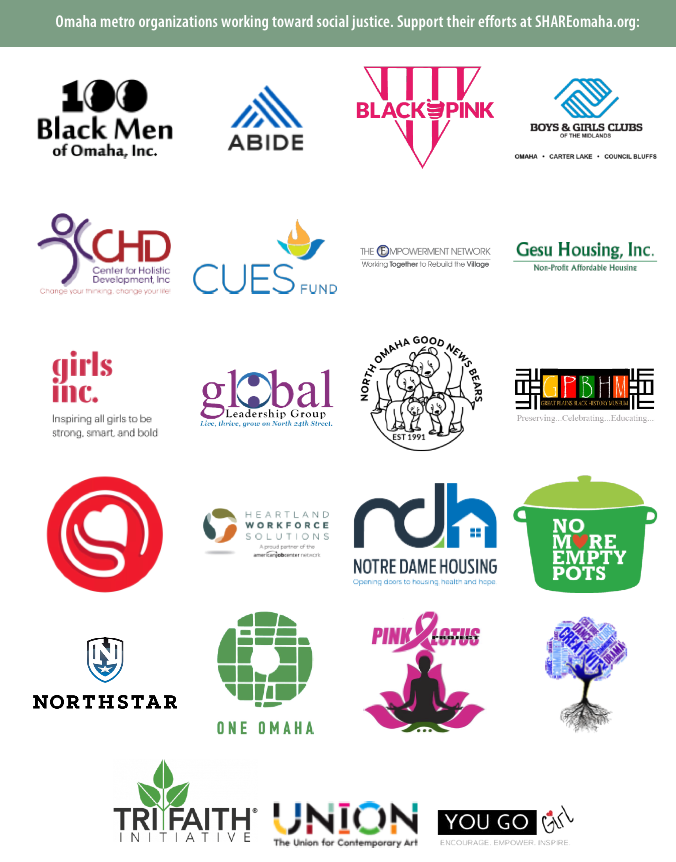 Allies For Justice… Learn and Become One

Who is a do-gooder? Either you are a do-gooder, or you know a few. SHARE Omaha defines do-gooders as those who see a need and do good for others or the community; those who raise their hands to help when a crisis or challenge arises around them; and those who regularly prioritize this good work, even in the light of personal sacrifice.

SHARE Omaha tells stories of volunteers, donors and general do-gooders regularly on our blog at SHAREomaha.org, and with this column we seek to act as a megaphone for those making our community and metro area better.

This month we spoke with two Omaha social justice leaders: Josh Dotzler, CEO of Abide, and Erik Servellon, deputy director of the Tri-Faith Initiative and recently named as one of Ten Outstanding Young Americans by the Jaycees.

We talked about allyship in light of current events that have exposed racial and social justice conversations.

Who is an ally?

Servellon defined allyship as a process by which a person advocates for an identity or group of identities close to their heart. Allies acknowledge truth.

“Allies are here to create space. When you step back and allow someone else to speak, you create that space for someone to have their voice. You support the work. When someone gives you a great idea, or policy or procedure, you say ‘yes,’ and you start acting to make it happen. Allies amplify the voice. They show up. They stand in solidarity and they start acting to amplify the voice of others,” Servellon said.

A time for allies

As allyship is a journey, we asked each leader how our local struggle with race and social justice is pushing individuals to take this journey. Servellon said, “For a lot of people this is a conversation that has never stopped; specifically, Black people with law enforcement. (This is) a deeply invested flash point, and there is energy behind it. People outside the Black community are starting to put on themselves to be that voice of support on the side of the Black community. We would like to be better as a society, and we’re not there yet. One person never accomplishes anything alone and with more people involved in supportive roles, the more equitable the solutions are going to be.”

Dotzler also responded to this question of how our metro area events are activating allies. “I think when you look at just the challenges with race and social justice, you see the scope and magnitude. It doesn’t just affect one demographic or one part of our city. It affects really everybody on different levels,” he said.

“…Omaha is bigger than one person, and so it causes you to reach beyond spheres of influences or circles that you typically would. I think (recent events) also bring a common mission and purpose, regardless of what we’re doing as an organization or individually. (Social justice) is something that we all agree needs to be addressed and needs to have some specific intentional action. I think it highlights our need for each other, because the challenges are so great.”

Who is showing up?

Servellon said he sees the Latinx community taking it upon themselves to understand a fight for Black racial equity is a fight for Brown racial equity. He elaborated, “I see a lot of Latino community members showing up; not there to be the thought leader. They want to be there when invited to be behind or to the side to support.”

Servellon also noted he is starting to see the clergy in Omaha being part of some protests and rallies. He said he sees more beginning to wade into civic matters. “They need to be in the forefront. They are an intersection of religion and people’s hearts,” he said.

Servellon and Dotzler talked about clergy and church leaders meeting all over Omaha regarding what they can do for efforts to support and provide guidance. One of the more tangible efforts Servellon discussed was seeing clergy approach the City-County Building before a press conference. They were praying for justice. It was a picture of clergy lending their weight to an effort that affects everybody.

Dotzler said about working with church leaders: “We’ve been able to have very authentic conversations. It’s also led to taking some action where we’ve been able to gather and pray. There’s been a posture of humility that’s been pretty powerful.”

He added, “I’ve seen church pastors and leaders from all across the city just come to the table and say, ‘I want to be a part of the solution. How can we do it together?’ and so the conversations that are happening and then also some of the actions have been pretty powerful.

“People are really listening, staying in their lane, but supporting efforts of the Brown and Black community,” Servellon said.

An ideal outcome for Omaha

Servellon and Dotzler have tangible visions of our metro’s future in regard to race relations and social justice. Omaha is seen by them and others as a racially divided city, and there are many facets to the future they envision.

Regarding rethinking law enforcement, Servellon said, “There are so many calls to defund the police. It is a macrocosm for a community, for a person disproportionally affected by a law enforcement system of oppression. (Police) do good work, but a restructuring of all the systems we have built under erroneous principles have to be undertaken.

“Defunding means we are going to fund the things cops shouldn’t be doing: mental health, education, social justice. Reallocation of line items that can be channeled into community services with so many benefits in the community.”

Servellon also serves as a medic for the Army National Guard and recruited and organized medics for the Memorial Park rally in June. He said he asks people who want to be allies to identify their skill set and channel it toward the communities they want to help.

Dotzler commented on our city as unique, having great prosperity and incredible poverty. “For me the dream is that Omaha wouldn’t be known as one of the most segregated cities but one of the most integrated ones. It would be a city that, no matter what your color is, you could live in any part of it. That there wouldn’t be a part of the city that’s known for crime, violence and poverty. ( At Abide) we have a dream that one day there’ll be a new inner city—a place that’s vibrant, full of life and a place where people want to live, not leave.”

Dotzler is asking people to make three commitments in becoming a greater ally.

1. Learn about injustice and grow in understanding

2. Stand up when you see injustice

3. Give resources to close the economic gap

Who are your do-gooders?

SHARE Omaha exists to be a conduit between nonprofit needs and the public doing good. The best way, we think, to spur that action is to inspire through telling stories of do-gooder actions and emphasizing that acts of goodness add up to a healthy and engaged community. If you would like to shine a spotlight on a do-gooder, shoot us an email at info@SHAREomaha.org.

Find your fit as an ally by volunteering for and donating to local causes at SHAREomaha.org.

Aug/Sept 2020: Allies For Justice… Learn and Become One