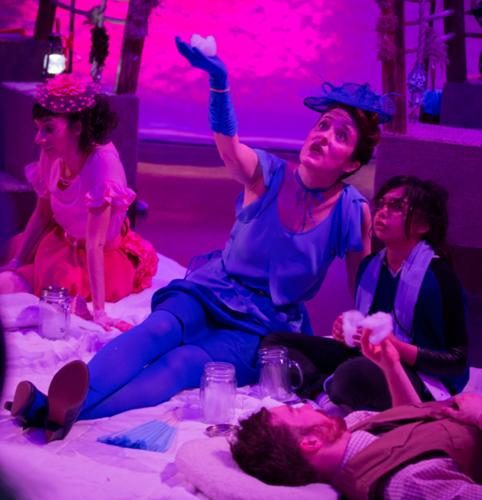 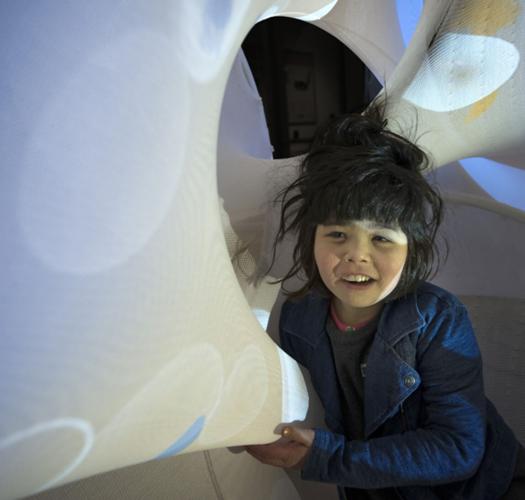 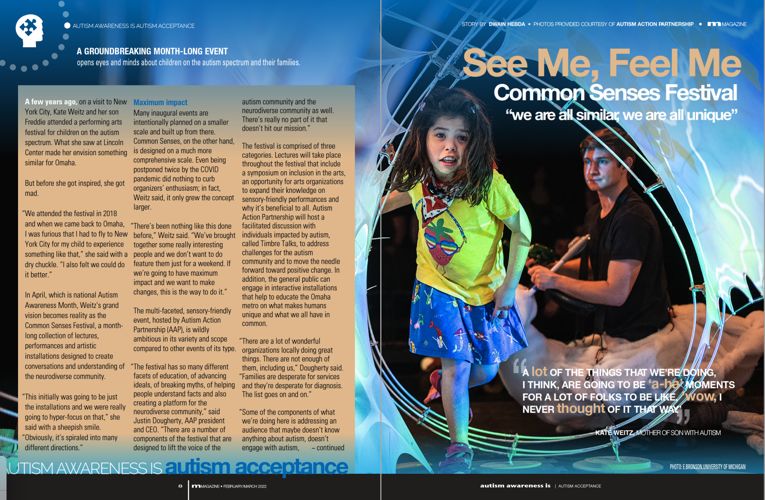 See Me, Feel Me

A groundbreaking month-long event opens eyes and minds about children on the autism spectrum and their families.

A few years ago, on a visit to New York City, Kate Weitz and her son Freddie attended a performing arts festival for children on the autism spectrum. What she saw at Lincoln Center made her envision something similar for Omaha.

But before she got inspired, she got mad.

“We attended the festival in 2018 and when we came back to Omaha, I was furious that I had to fly to New York City for my child to experience something like that,” she said with a dry chuckle. “I also felt we could do it better.”

In April, which is national Autism Awareness Month, Weitz’s grand vision becomes reality as the Common Senses Festival, a monthlong collection of lectures, performances and artistic installations designed to create conversations and understanding of the neurodiverse community.

“This initially was going to be just the installations and we were really going to hyper-focus on that,” she said with a sheepish smile. “Obviously, it’s spiraled into many different directions.”

Many inaugural events are intentionally planned on a smaller scale and built up from there. Common Senses, on the other hand, is designed on a much more comprehensive scale. Even being postponed twice by the COVID pandemic did nothing to curb organizers’ enthusiasm; in fact, Weitz said, it only grew the concept larger.

“There’s been nothing like this done before,” Weitz said. “We’ve brought together some really interesting people and we don’t want to do feature them just for a weekend. If we’re going to have maximum impact and we want to make changes, this is the way to do it.”

The multi-faceted, sensory-friendly event, hosted by Autism Action Partnership (AAP), is wildly ambitious in its variety and scope compared to other events of its type.

“The festival has so many different facets of education, of advancing ideals, of breaking myths, of helping people understand facts and also creating a platform for the neurodiverse community,” said Justin Dougherty, AAP president and CEO. “There are a number of components of the festival that are designed to lift the voice of the autism community and the neurodiverse community as well. There’s really no part of it that doesn’t hit our mission.”

The festival is comprised of three categories. Lectures will take place throughout the festival that include a symposium on inclusion in the arts, an opportunity for arts organizations to expand their knowledge on sensory-friendly performances and why it’s beneficial to all. Autism Action Partnership will host a facilitated discussion with individuals impacted by autism, called Timbre Talks, to address challenges for the autism community and to move the needle forward toward positive change. In addition, the general public can engage in interactive installations that help to educate the Omaha metro on what makes humans unique and what we all have in common.

“There are a lot of wonderful organizations locally doing great things. There are not enough of them, including us,” Dougherty said. “Families are desperate for services and they’re desperate for diagnosis. The list goes on and on.”

“Some of the components of what we’re doing here is addressing an audience that maybe doesn’t know anything about autism, doesn’t engage with autism, doesn’t see the life of the community through the eyes of autism, but would love to know more. Through this festival, we’re hoping to connect with a lot of folks who have that interest and the desire to do better and create better, more inclusive anything in this community.”

The second component of programming is art and technology installations, a series of created environments and structures that engage the senses in ways that are inclusive of a variety of tolerances and comfort levels.

Sean Ahlquist, associate professor at Taubman College of Architecture + Urban Planning at the University of Michigan, is one of several individuals whose installations are featured at Common Senses. Ahlquist’s unique playscapes utilize textiles stretched over a framework to create almost unlimited tactile and sensory experiences.

“Environment, with the right combination of sensation for each child, can really activate and turn the lights on and make them engaged and more interested in learning, or interested in social interaction, or able to engage social interaction,” he said. “My search is to understand what are the key components to environment that help with that, and also how much can the individual shape the environment themselves.”

Ahlquist, himself a parent of a child on the autism spectrum, said creating any playscape for such children presents enormous challenges as the condition is highly individualized insofar as how each child interacts with the world around them. That’s what led him to utilize fabric, which provides a much higher level of flexibility than other structural material.

“The idea, very simply, is that it’s quite an elaborate version of a camping tent, in a way,” he said. “What’s nice is, by taking that kind of lightweight approach towards the materiality of it, everything has a certain level of flexibility to it. There’s always an immediate cause-and-effect relationship so that the child can understand, ‘I can impose my will on this thing,’ which is often one of the failings of environment and when we see the most upsetting moments.”

“A lot of the things that we’re doing, I think, are going to be ‘a-ha’ moments for a lot of folks to be like, ‘Wow, I never thought of it that way."

~ Kate Weitz, mother of a son with autism

The third component of the festival, performance, features critically acclaimed multi-sensory theatrical experiences, developed by New York-based troupe Trusty Sidekick and licensed by The Rose children’s theater in Omaha. The Rose actors will deliver an immersive production designed specifically for young audiences on the autism spectrum. Performed before small audience groups, each member gets one-on-one attention as they enjoy a performance featuring puppetry, live music and interactive play.

“The inspiration for the performing and individual art components of this was, in part, through recognizing the division between the arts and technology research and science, and wanting to blend these two worlds,” Dougherty said. “Why are the science academia people over here and the arts people over here when they’re doing stuff that is so complementary and can have a greater impact if it’s kind of woven together?

“Through that lens we’ve found some people who are doing exactly that, which is weaving the arts and the sciences together in a way that is advancing things, whether it’s for the autism community specifically or for the general public’s understanding of what sensory processing means. We’re not just replicating something that was super cool. We’re adding a whole different lens to it that really makes this the first of its kind, that we’re aware of, in the world.”

Both Weitz and Dougherty are quick to point out that for all that Common Senses offers for families who are on the autism spectrum, the festival offers equally important learning opportunities for those who are not.

“For the smaller community of what my family is in, we’re really pushing to make this festival a launching point to have sensory-friendly performances and more relaxed experiences, so that it’s not as isolating for families like ours to get into the community and to have something to do,” Weitz said.

“But I also think one of the more important things for me is the messaging people take away once they’ve experienced the installations and they’ve gone to a performance. That is, when you make things better, when you adapt in a certain way for our very vulnerable population, it ends up being better for everyone. A lot of the things that we’re doing, I think, are going to be ‘aha’ moments for a lot of folks to be like, ‘Wow, I never thought of it that way.’

“As a mother, yes, I want to try to make things better for my son, and there’s a benefit for everyone.”

"The festival has so many different facets of education, of advancing ideals, of breaking myths, of helping people understand facts and also creating a platform for the neurodiverse community…there’s really no part of it that doesn’t hit our mission. there’s been nothing like this done before… if we’re going to have maximum impact and we want to make changes, this is the way to do it."

Get the latest information on Common Senses events and scheduling at commonsensesfestival.com.

“We are all similar, we are all unique”