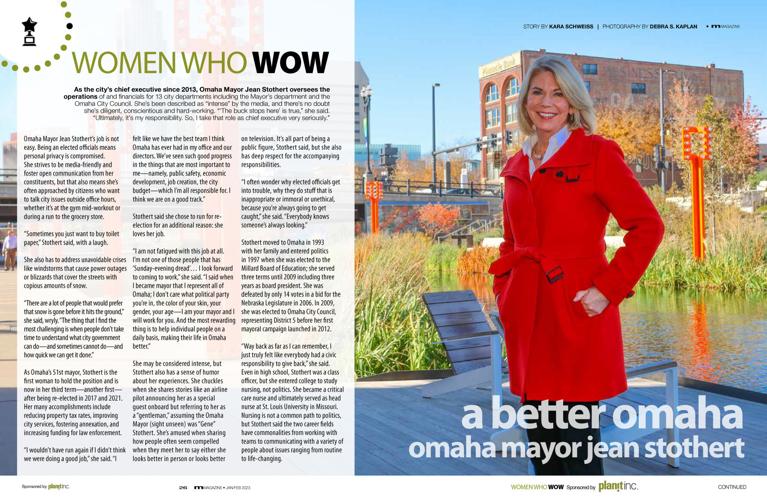 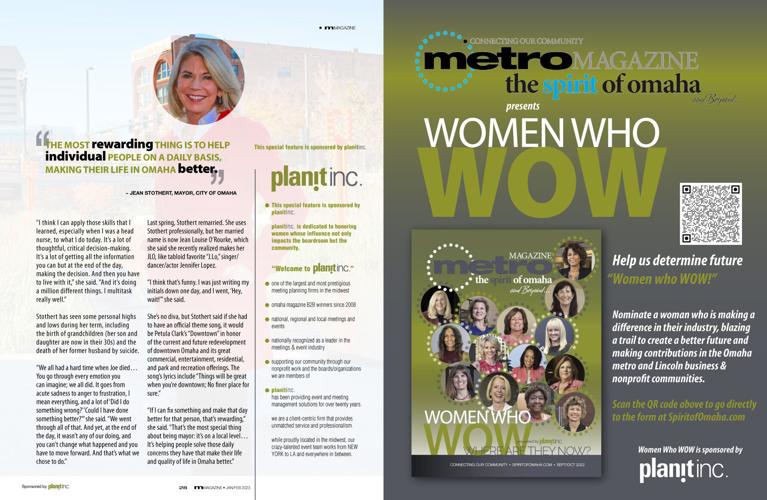 As the city’s chief executive since 2013, Omaha Mayor Jean Stothert oversees the operations of and financials for 13 city departments including the Mayor’s department and the Omaha City Council. She’s been described as “intense” by the media, and there’s no doubt she’s diligent, conscientious and hard working. “‘The buck stops here’ is true,” she said. “Ultimately, it’s my responsibility. So, I take that role as chief executive very seriously.”

Omaha Mayor Jean Stothert’s job is not easy. Being an elected officials means personal privacy is compromised. She strives to be media-friendly and foster open communication from her constituents, but that also means she’s often approached by citizens who want to talk city issues outside office hours, whether it’s at the gym mid-workout or during a run to the grocery store.

“Sometimes you just want to buy toilet paper,” Stothert said, with a laugh.

She also has to address unavoidable crises like windstorms that cause power outages or blizzards that cover the streets with copious amounts of snow.

“There are a lot of people that would prefer that snow is gone before it hits the ground,” she said, wryly. “The thing that I find the most challenging is when people don’t take time to understand what city government can do—and sometimes cannot do—and how quick we can get it done.”

“There are a lot of people that would prefer that snow is gone before it hits the ground,” she said, wryly. “The thing that I find the most challenging is when people don’t take time to understand what city government can do—and sometimes cannot do—and how quick we can get it done.”

As Omaha’s 51st mayor, Stothert is the first woman to hold the position and is now in her third term—another first— after being re-elected in 2017 and 2021. Her many accomplishments include reducing property tax rates, improving city services, fostering annexation, and increasing funding for law enforcement.

“I wouldn’t have run again if I didn’t think we were doing a good job,” she said. “I felt like we have the best team I think Omaha has ever had in my office and our directors. We’ve seen such good progress in the things that are most important to me—namely, public safety, economic development, job creation, the city budget—which I’m all responsible for. I think we are on a good track.”

Stothert said she chose to run for reelection for an additional reason: she loves her job.

“I am not fatigued with this job at all. I’m not one of those people that has ‘Sunday-evening dread’… I look forward to coming to work,” she said. “I said when I became mayor that I represent all of Omaha; I don’t care what political party you’re in, the color of your skin, your gender, your age—I am your mayor and I will work for you. And the most rewarding thing is to help individual people on a daily basis, making their life in Omaha better.”

She may be considered intense, but Stothert also has a sense of humor about her experiences. She chuckles when she shares stories like an airline pilot announcing her as a special guest onboard but referring to her as a “gentleman,” assuming the Omaha Mayor (sight unseen) was “Gene” Stothert. She’s amused when sharing how people often seem compelled when they meet her to say either she looks better in person or looks better on television. It’s all part of being a public figure, Stothert said, but she also has deep respect for the accompanying responsibilities.

“I often wonder why elected officials get into trouble, why they do stuff that is inappropriate or immoral or unethical, because you’re always going to get caught,” she said. “Everybody knows someone’s always looking.”

Stothert moved to Omaha in 1993 with her family and entered politics in 1997 when she was elected to the Millard Board of Education; she served three terms until 2009 including three years as board president. She was defeated by only 14 votes in a bid for the Nebraska Legislature in 2006. In 2009, she was elected to Omaha City Council, representing District 5 before her first mayoral campaign launched in 2012.

“Way back as far as I can remember, I just truly felt like everybody had a civic responsibility to give back,” she said. Even in high school, Stothert was a class officer, but she entered college to study nursing, not politics. She became a critical care nurse and ultimately served as head nurse at St. Louis University in Missouri. Nursing is not a common path to politics, but Stothert said the two career fields have commonalities from working with teams to communicating with a variety of people about issues ranging from routine to life-changing.

"The most rewarding thing is to help individual people on a daily basis, making their life in Omaha better."

“I think I can apply those skills that I learned, especially when I was a head nurse, to what I do today. It’s a lot of thoughtful, critical decision-making. It’s a lot of getting all the information you can but at the end of the day, making the decision. And then you have to live with it,” she said. “And it’s doing a million different things. I multitask really well.”

Stothert has seen some personal highs and lows during her term, including the birth of grandchildren (her son and daughter are now in their 30s) and the death of her former husband by suicide.

“We all had a hard time when Joe died… You go through every emotion you can imagine; we all did. It goes from acute sadness to anger to frustration, I mean everything, and a lot of ‘Did I do something wrong?’ ‘Could I have done something better?’” she said. “We went through all of that. And yet, at the end of the day, it wasn’t any of our doing, and you can’t change what happened and you have to move forward. And that’s what we chose to do.”

“I think that’s funny. I was just writing my initials down one day, and I went, ‘Hey, wait!’” she said.

She’s no diva, but Stothert said if she had to have an official theme song, it would be Petula Clark’s “Downtown” in honor of the current and future redevelopment of downtown Omaha and its great commercial, entertainment, residential, and park and recreation offerings. The song’s lyrics include “Things will be great when you’re downtown; No finer place for sure.”

“If I can fix something and make that day better for that person, that’s rewarding,” she said. “That’s the most special thing about being mayor: it’s on a local level… It’s helping people solve those daily concerns they have that make their life and quality of life in Omaha better.”

This feature article is sponsored by planitinc.

planitinc. is dedicated to honoring women whose influence not only impacts the boardroom but the community.

• nationally recognized as a leader in the meetings & event industry

• has been providing event and meeting management solutions for over twenty years.

• we are a client-centric firm that provides unmatched service and professionalism.

• while proudly located in the Midwest, our crazy-talented event team works from NEW YORK to LA and everywhere in between.